Jakob ben Luria changed and completed his books up until his passing away (Aug. 2005). In order to make these extraordinary insights of Jakob ben Luria already limited accessible this short and convenient book was arranged and written (originally in German, now also translated into English and Dutch). It can be downloaded free of charge.

Finding out the truth was the main aim of Jakob ben Luria, as he was interested in reality, and not in dogmas. Originally a physicist he was indefatigably looking for objectively verifiable conformity with natural laws within the Thenach ("Old Testament"), firmly convinced that the Word of God is perfect as God himself and religious truth and reality are completely analogous. As he expected the presence of evidence of a uniform logical order in the whole of the Thenach consistently persisted in the deeper layers of numerical values, connotations and word relations. Therefore his was interested in computer programming, expecting that he could better research the depths within.

Jakob ben Luria’s work makes clear that much biblical symbolism can be explained univocally and objectively, if one knows its meaning, and a much more extensive reality becomes visible than only through the literal horizontal stories. In this way his explanations about the Biblical Creation traditions make irrefutably clear that an all comprising comprehensive order of a material and spiritual reality lies underneath the seven days of creation. When one comprehends this order, one cannot longer stick to the traditional held interpretation of a creation in one working week. Some of these facts are also included in this (limited) summary of the explanations of Jakob ben Luria.

Read more about objectively demonstrated cases in the Word of God, e.g. how the first verse of the story of Creation and the first verse of the Ten Words (not Commandments) show striking similarities and how that also clarifies that the Ten Words are not ten commandments (as often translated), but are connected to the order of Creation like a manual of a machine is connected with its construction and functionality.

In all explanations the Hebrew words are included. Using a dictionary (Biblical) Hebrew-English one can check the translations and judge for oneself.

4. The sending from Paradise

7. The patriarchs, Judah and Siloh

8. The Torah, Israel and the world 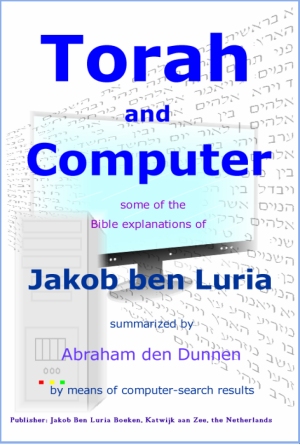